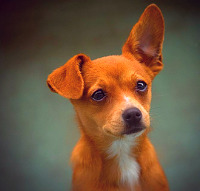 Farmer Jones was very lonely and very bored. He lived by himself in an old house on the edge of the village, and rarely talked to anyone. The villagers thought that he ought to have a pet for company, but the only animal they could find was a dog which had only one ear.

When Farmer Jones saw this peculiar-looking animal, he shouted: ‘Get out of my house!’

The dog, to his surprise, responded by doing exactly the opposite. It wagged its tail and went into the house.

The farmer stared at the funny dog for a while and then said finally, ‘Ah, well, you might as well stay, I suppose. Come and sit next to me.’

The dog wagged its tail, but walked away from the man, and went to sit on the other side of the room. Sit on the chair said the farmer. The one-eared dog promptly sat under it.

The farmer took the dog outside and pointed up the road: the dog immediately turned round and went down the road. The farmer was absolutely fascinated.

‘Why do you always do exactly the opposite of what I tell you to do?’ he asked. The dog just looked up at him with his head on one side, and his solitary ear sticking up like a radio aerial.

Perhaps it is because the poor thing has only one ear, he thought to himself.  Anyway, he began to spend all his spare time training the dog, until eventually it would do everything he ordered – as long as he said the opposite of what he wanted.

A horse, which had been watching these strange events, finally asked the dog: ‘Why do you always do the opposite of what he tells you to do? Is it because you have only one ear?’

‘Of course not replied the dog. l started to do it because I don’t think he would have been interested in an ordinary dog, do you?’

And, indeed, the farmer was no longer lonely or bored: he now had very interesting company.